The story to read, see and hear

The simulated letter transparen#543203 shown, including its information, is in the custody of the Hamburg Regional Court [lgHH].
On the basis of this letter, the Civil Chamber 15 of the Regional Court of Hamburg passed a judgment against the association who's afraid of on. e.V., which, in the event of infringement, holds out the prospect of a fine of up to EUR 250,000 or imprisonment for up to six months. This letter, which is indispensable for a court case - it contains the statement of claim and the summons - has not yet reached the convicted parties.

It is highly probable that its existence need not be doubted, since both the presiding judge of Civil Chamber 15, Mr. Markus Schneider, and the judge appointed by the President of the Regional Court to conduct an investigation, Dr. Pfannenstiel, confirmed after inspecting the court file that this letter is in the court file.

The following is important for understanding the context:
who's afraid of on. is an international initiative that promotes the analysis, development and shaping of online systematics. In Germany, an association of the same name was founded in spring 2002 and entered in the Hamburg Register of Associations in July. The association acts with the subtitle For developping of justness through online systems and develops justice-promoting measures with artistic and scientific methods. Among other things, the association was able to win the external service Communication Expertise for a valuable expansion of the spectrum according to the statutes.

In the context of such a communication expert opinion, a lawyer was called in by one of the parties involved in a communication complex to be assessed, who considered the expert opinion to be legal advice and called in the Hanseatic Bar Association of Hamburg [hrak] for what he considered to be a possible warning. A cease-and-desist declaration demanded on it was not delivered by the warned association several times justified. Nevertheless, the Hanseatic Bar Association filed a lawsuit with the Hamburg Regional Court. The lgHH sent the developer, author and also creator of the disputed expert opinion, Erwin Liedke, a complaint in which a reference of some kind to the association who's afraid of on. e.V. could not be ruled out. As a member of the board of the association, Erwin Liedke asked several times on behalf of the association whether the association itself was a defendant, since the association had not yet received any complaint and would like to defend itself separately if necessary.
On May 7, 2003, the scheduled hearing took place without service of process on the association - without the presence of the (uninformed) association. A judgment was subsequently issued against the association on the grounds of default.

The admonished reappraisal initially requested by the association was rejected as unfounded by the president of the Hamburg Regional Court, who was led by Judge Dr. Pfannenstiel as unfounded, since the presiding judge of Civil Chamber 15 [ZK15], Judge Markus Schneider, had stated in an official statement that "the defendant to 2 [note: Erwin Liedke] has obviously returned the shipment together with the complaint and summons unopened with the handwritten note 'back to sender'; the envelope with the complaint and summons is again in the file.

Investigations against Executive Board

On the basis of this accusation, the association felt obliged to initiate further investigations also against its board member and requested the support of the international initiative who's afraid of on for this purpose. The President of the Hamburg Regional Court and the Chairman of ZK15 were requested to send the disputed document for the investigation by August 22, 2003.
On August 21, 2003, Erwin Liedke explained to the parties involved with the help of an eyes2k_Tool© [here: Sworn Statement] that he "... did not mark any postal item to the association who's afraid of on. e.V. with the handwritten note 'back to sender" [translated quote].

The regional court did not serve the piece of evidence until today, so that the initiative in its final 11 sides summarizing appraisal concerning these facts could note the following: "Within the available investigations it is not ascertainable whether a corresponding letter of complaint to the association
. - was ever drawn up by the civil chamber 15,
- was created at the claimed date 03.04.2003,
- existed at the time of the hearing 07.05.2003,
- was sent to the association who's afraid of on. e.V.,
- has returned and,
- if it was returned, by whom it was returned." [translated quote]
Furthermore, it is not apparent why the Civil Chamber 15 had the complaint served on the association merely by posting it in the mailbox, according to Mr. Richter Schneider's statement."

The investigations against Executive Board member Erwin Liedke were discontinued on September 9, 2003 on the basis of Erwin Liedke's Sworn Statement and the failure of Civil Chamber 15 of the Regional Court to present evidence.
The association who's afraid of on. e.V. is thus according to statements of the for the president of the regional court examining judge Dr. Pfannenstiel as well as the chairman of the civil chamber 15, Mr. judge Schneider owner of a "consignment together with complaint and summons", which did not come up to the today's day into the legal possession of the association. The Association is sure that the District Court will not doubt the legality of the ownership.

The association who's afraid of on. auctions/sells transparentCIs in the single value of € 100 with an edition of 180 pieces, of which 72 are available for the free participation, 84 remain in the possession of the association and 24 with GeheimRat.
. The value of the provisionally put on total of shares results by the integration of 2 competencies/capacities over a period of 15 basic fee units € 600,- each as well as the imaginary potential for the justice index by the activated measure. An extension of the edition is possible by additional value stresses at the earliest after 7 months in each case.

Each shareholder acquires the right to take temporary possession of the original letter, the work transparen543203 of GeheimRat for exhibition purposes of an economic, scientific or artistic nature in consultation with the department responsible for this at who's afraid of on. e.V.. Any costs for insurance, transport, etc. shall be borne in advance by the party taking possession.

The auction/sale of the share certificates will take place irregularly and optionally in other countries/platforms. There is currently no trading venue for acquired share certificates. A transfer and/or sale may be granted with the approval of the remaining shareholders. In case of refusal, the other shareholders are obliged to repurchase in the value of the purchase price + an annual increase of the nominal value of 6%. Each acquirer of a share must necessarily guarantee his own email accessibility. Changes are who's afraid of on. e.V. under the address n0 [at] whosafraid.org to announce immediately. A change or extension of these regulations can be obtained with a 60% majority by the entirety of the shareholders, voting via email is to be used explicitly for this purpose. The transparenCI holders agree to the publication of their name and the number of their tCIs on whosafraid.org. The transparentCI will be sent by e-mail as an attached pdf file.

Any further activities regarding the facts and the exhibit are reserved to the buyer/acquirer. 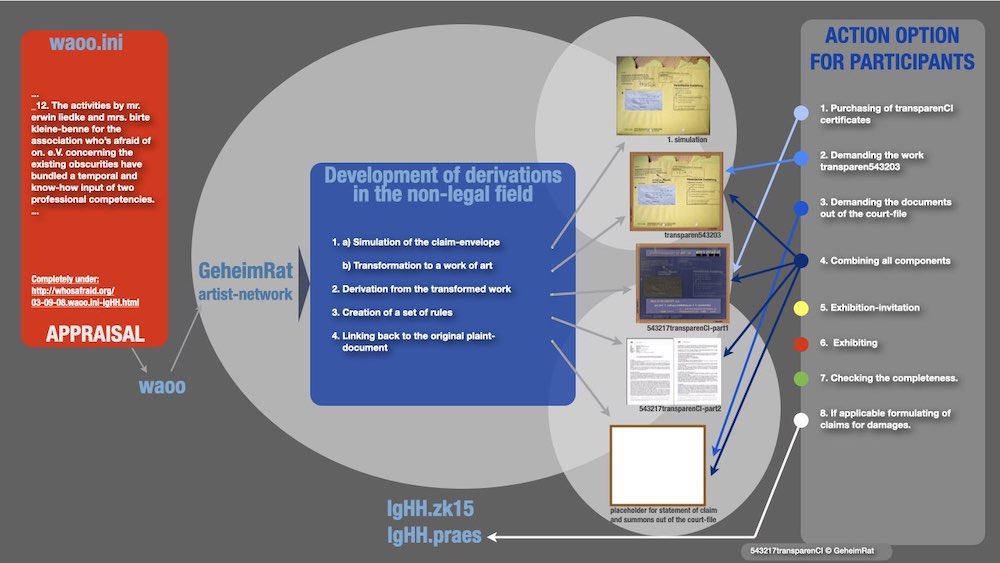 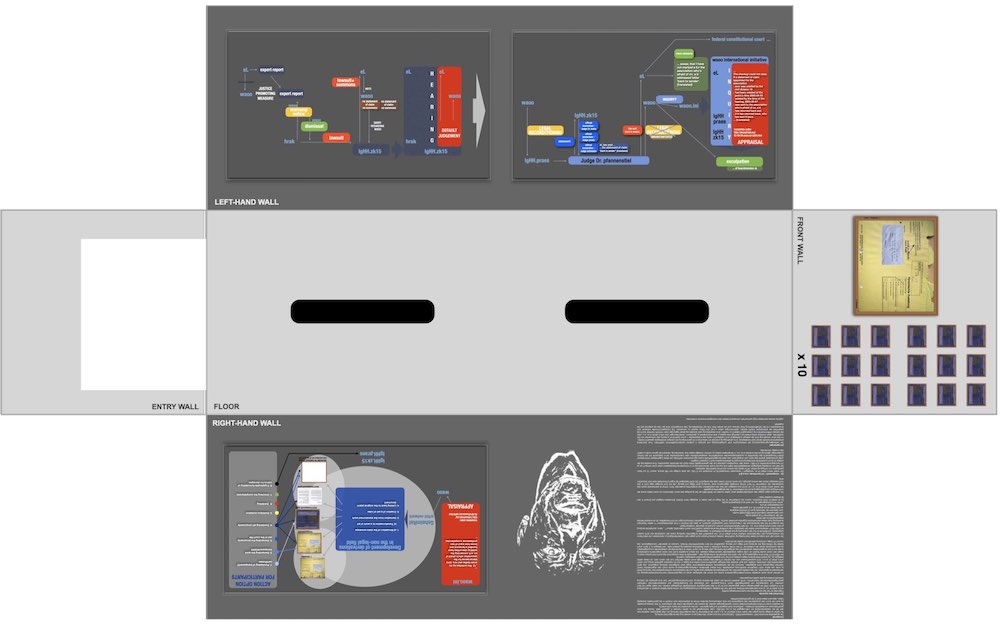